The UNESCO World Heritage Convention from 1972 is an international treaty out of which a prestigious program has developed for the recognition of cultural and natural sites. For many years experts have been concerned with the question of whether the increasing success and popularization of the World Heritage program comes at the expense of the substance of the Convention. Among the problems are the overall rapid growth as well as the lack of geographical and typological balance of the World Heritage List, insufficient monitoring as well as an increasing politicisation of decisions about the inclusion of sites on the List.

Marie-Theres Albert and Birgitta Ringbeck are two excellently proven experts on the matter who know both the methodological approaches to World Heritage as well as the complexity of political practice in the structuring of the World Heritage Convention. In this volume, they give a comprehensive insight into the development and changes of the World Heritage concept from its inception to today. Of particular interest in this volume is that the authors critically illuminate the discourse through which World Heritage is spoken and negotiated and analyse the emerging modernization processes of recent years. Thus it only makes sense to also include a substantial chapter on the Intangible Heritage and to address its relation to World Heritage.

This volume is distinguished by its pointed uptake of critical questions and its detailed case study illustrations. The book concludes with an appeal to regard World Heritage more strongly as the common property of citizens and to better entrust them with responsibility for the sustainable use of their heritage. The demand for a broader participation of civil society in the preservation of our common cultural and natural heritage – beyond its handling as a political and administrative tool – is in fact one of the central points of the development strategy of the concept of World Heritage for the next decades. 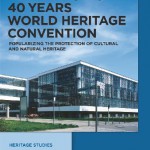