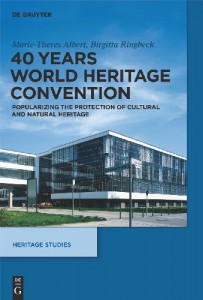 The Convention for the Protection of Cultural and Natural Heritage (World Heritage Convention) was adopted by the General Conference of UNESCO in November 1972, but only came into force in 1975. The Convention, to date ratified by 191 States, belongs without doubt to the most successful international legal documents; it enjoys a tremendous popularity not only in Germany but also worldwide.

UNESCO can be proud of this Convention, an excellent instrument created to honour and protect the cultural and natural heritage of the peoples of the world. When one hears the name UNESCO, one first thinks of UNESCO World Cultural and Natural Heritage. Presently, the names of 1031 sites can be found on the World Heritage List.

The two authors have made a name for themselves over many years through a variety of publications, not only in Germany, but also in the framework of their work for UNESCO. In this volume, they could draw on their numerous technical articles and pool, take stock of and further develop their theoretical knowledge and practical experience.

The volume consists of seven chapters. The introductory Chapter 1 postulates the preservation of heritage as “an exceptional political, participatory and interdisciplinary act” (p. 2). It follows that it is necessary both in the nomination as well as in measures for the preservation of cultural and natural sites that, “as far as possible, all groups of affected peoples at the local, national or international levels” be involved (p. 3). This demand for critical and constructive participation runs like a red thread through the individual chapters. Another critical remark, on which following chapters go into depth, refers to the Eurocentric predominance. The authors speak of a “glaring imbalance” between the objectives and the implementation of the Convention when one considers the number of inscribed sites in Europe and North America compared to the rest of the world (pp. 5-9).

Chapter 2 focuses on the question “What is World Heritage?”. Here it lists very different World Heritage sites and cites their criteria for justification. Beginning with this chapter, colour photos are used for better illustration – highly engaging in the process of reading the text. Finally, the authors move on to the crucial concerns of the care and conservation of World Heritage sites and refer to the “List of World Heritage in Danger”, also called the “Red List”, which in Cologne and Potsdam proved to be a successful instrument for preventing damage (pp. 40- 44).

Chapter 3 discusses in more detail the evolution of the World Heritage Convention and the associated perspective changes over time, among which four phases are distinguished, which moved away from the initial strict, conservative interpretation towards a popularization of World Heritage. Already in the first phase (1978-1991) the imbalance between “Europe and the rest of the world” (p. 60) could be seen in inscriptions, which, in spite of the increase in the total number of inscriptions in the following three phases up until 2013, still hovered around 50 percent. In 1994, UNESCO finally adopted a Global Strategy to reduce the geographical and cultural imbalances. It involved the question of “how to integrate the visions of cultural diversity as defined in the Convention in the form of intercultural, religious, authentic or social views of diversity into the overall aspect of heritage” (p. 84). But the imbalance continued, the lack of financial and human resources needed to successfully complete the nomination process being suggested as a key reason (p. 93).

Chapter 4 (“Discourses Surrounding World Heritage”) bridges the gap from the stock of previously developed tangible discourses to discourses which centre on “heritage” in the English sense of the word. [The original version of this book has been published in German]. One should question, for example, why and under what social conditions the beautiful castles originated. It is postulated that social responsibility is to shape heritage “in the sense of the potential capacity to sustain peaceful and sustainable human development” (p. 96). The imbalance in the World Heritage List is criticised for and explained by the dominance of European experts in the governing bodies of ICOMOS and IUCN, each with 50 percent. Their representatives not only evaluate proposals, but also often advise applicants privately: “Just this dual function alone displays a lack of any real objective and professional independence, and brings into question ad absurdum the repeatedly emphasized objectivity with respect to the listing of sites” (p. 110).

Against the background of globalisation processes, climate change, cross-regional migration processes and also worldwide demographic trends, the authors call for holistic, interdisciplinary theoretical approaches that will help to connect the protection and use of heritage, with the interest of human and sustainable development.

Chapter 6 (“World Heritage versus Intangible Cultural Heritage”), justified by the criticisms above, explains why in recent years UNESCO has developed new programs and conventions. At the centre is the Convention for the Safeguarding of the Intangible Cultural Heritage, which was adopted in 2003. The history, objectives and content of the Convention are presented. Attention is drawn to “the utmost importance that actual carriers of intangible cultural heritage be fully included (communities, groups and, if applicable, individuals that can create, safeguard and pass on the cultural heritage) in implementing the Convention, in identifying intangible cultural heritage, and in carrying out all safeguarding and support measures” (p. 166), to which the Parties have committed themselves.

At last in Chapter 7 (“Prospects for the Future”), the authors deal with “the potential that World Heritage holds for sustainable human development in the broadest sense” (p. 174). The concept of sustainability is defined in close association with human development and goes far beyond the ecological dimension. They postulate its implementation in the institutions and structures of civil society. The authors criticise the current lack of implementation strategies and application-oriented research and propose, among other things, cultural studies as a promising approach (p. 177).

The volume is supplemented by a number of appendices, consisting of a glossary, a bibliography and an index.

The volume is an excellent scientific and discussion book on the development of the World Heritage Convention up until now with its strengths and weaknesses and consequent implications for the future. Only in light of the obvious weaknesses, such as, among others, Eurocentric dominance on many levels, lack of participation “from the bottom up”, increasing politicisation  “at the top” with the tendency to assert national interests, one-sided view and focus on the tangible without social references, the authors succeed in developing the first conceptual ideas for crossing the bridge to intangible heritage in order to determine the value status of World Heritage in a new, ever self-defining world society.

The fact remains: UNESCO World Heritage belongs to us all in this world; it is, however, not only ownership, but also obligation in the sense of heritage for a better, peaceful world for our and future generations.